Aylesford with Index of names below

Back to Churchyards listed 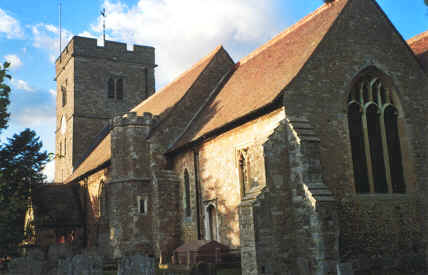 THE CHURCH FROM THE SOUTH EAST
SECTION A IN THE FOREGROUND

Introduction
The Parish Church of St. Peter and Paul, Aylesford, is impressively sited on the edge of high ground above the Medway, and the medieval bridge. A large medieval church, with a nave and north aisle of equal size, the chancel and north chapel have slightly lower roofs than the nave. The bottom two stages of the large tower are Norman.
In 1878 Henry Brassey spent £3,500 on the "restoration" of the church, when many monuments were moved from their original positions. It was generally considered that the "restoration" diminished the charm and atmosphere of the old interior. The monuments on the tower walls were among those moved at this time. The ledger to George Faunce and three very fine medieval stone coffin lids were moved outside, against the east wall of the chancel. These medieval monuments have suffered very badly from exposure to 133 years of weather.
Four monuments remained in their original positions, the stupendous Baroque Banks monument in the north chapel; the Colepepper monument, with it's original colouring, between the chancel and the north chapel; the Milner monument on the north wall of the north chapel and the Faunce monument on the east wall of the north chapel.
There are some pieces of armour relating to some of the monuments, and two funeral hatchments relating to the Milners,; other hatchments were apparently destroyed in the 19th century!
I have divided the large churchyard into six clearly delineated areas, which together with the brief description of the type of monument, will help with any search. I have limited this record of the churchyard to pre – 1920 graves and monuments.
The earlier monuments are clustered around the church, and include many early chest tombs, a rare table tomb and several 17th and early 18th century headstones. Where parts of the inscription are eroded and, for instance, dates are missing, I have usually been able to add the missing sections by referring to sources such as the burial registers. Where these missing areas occur, I have enclosed them thus, [ ]. All the inscriptions are laid out exactly as on the monument, which makes for much clearer reading.
Due to exposure to weather, in some cases, for over three centuries, many of the monuments suffer from various degrees of erosion, some severe; where there is doubt, I have indicated it with a question mark, (usually day of death). I have tried my best to recover as much detail as accurately as I could, but complete accuracy can never be guaranteed.
As a supplement to the inscriptions, I have included over 50 Will Abstracts (I have not included wills after 1858; these are in the Principal Probate Registry and the cost of copies is too high , however a summary of Henry Brassey's will was published in the Times, so this is included). I have also included Newspaper Reports of accidental deaths, as well as brief details from various Directories, the Census and an Archive record of alleged poisoning!
There are also some colour photographs .
My thanks to the Vicar, the Reverend Christopher Van Straaten and members of the congregation for their friendly interest and encouragement.

Section C All the area North of the Church, to the Southern edge of the carpark and from the East Wall of the Churchyard to the North West corner of the Vestry

Section D All that area West of the Church, North of Section B, as far as the Brassey Tomb

Section E All that area North of Section D, from the Western end of the carpark to the Western fence and North Churchyard Wall

Section F All that area North of the carpark, pre-1920 graves only

Index of Names - from gravestones only

you can jump to the Section containing the number. To search the page text press CTL + F together and type in the name in the search box at the top left of the screen. The cursor will jump straight to the name, highlighting . Be sure to click on  >  at the top left box, if the result shows more than one match.

you can jump to the Section containing the number. To seach the page text press CTL + F together and type in the name in the search box at the top left of the screen. The cursor will jump straight to the name, highlighting . Be sure to click on  >  at the top left box, if the result shows more than one match.


Back to Names index

Back to Churchyards Listed 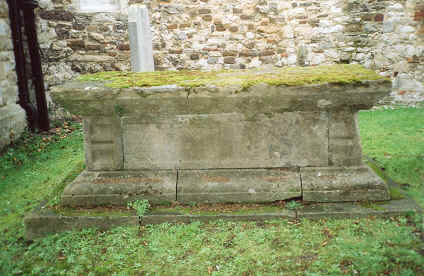 TOMB OF EDWARD BALDOCK, DIED 1723, AND ANN BALDOCK
IN THE BACKGROUND, LEFT, IS THE HEADSTONE
OF THEIR DOBSON RELATIONS, AND RIGHT, THE
SMALLER HEADSTONE OF THEIR DAUGHTER ELIZABETH ATHAWES

Edward Baldock, died 1723, was a Yeoman. His P.C.C. Will (Prerogative Court of Canterbury) is dated 28th February 1717 (1718)
To his son Thomas, his house, storehouses and 2 acres of land where Thomas now lives, for life. After Thomas dies, to Samuel Athawes, Yeoman of Boxley, in trust, for grandson, William Baldock, eldest son of Thomas. If William has no lawful heirs, then to Thomas's next eldest son, Edward. If Edward has no lawful heirs, then to next son, Thomas. If Thomas has no lawful heirs, then to Edward and Samuel, sons of Samuel Athawes (grandsons) for ever.
To son Edward Baldock, all his property and land in Maidstone for life. After Edward's death, to his male heirs, in default of such, to his female heirs; in default, to all his grandsons, sons of son Thomas, then living, for ever.
To son in law Thomas Dobson half of his house and mill, with lands in Aylesford occupied by Henry Beaumont, for his life. After Dobson's death, to his daughter, Mary Dobson, for life. After her death, to all their children, then living and to their heirs. If no heirs, then to son Edward Baldock and his male heirs, if no heirs, then to sons of son Thomas, for ever.
Son in law Thomas Dobson shall pay executors £100 or discount the sum from money testator owes him on bond. To daughter, Margaret Baldock, and her heirs for ever, the other half of the house, mill and lands in Aylesford. Margaret also gets £50.
To son Edward all his property in Throwley and Ospring(e), after death of his mother, for life. After Edward's death, to his male heirs, in default, to his grandsons, Edward and Samuel Athawes, Edward and John Dobson, for ever.
To son Edward all his property in Tudely and Tunbridge, in trust, to sell. Money to children of son Thomas, daughters Mary Dobson , Anne Taylor and Jane Courly ?, and of son in law Samuel Athawes by his deceased daughter, Elizabeth.
To son Thomas his lighter or vessel he now works in. To daughter, Anne wife of Augustine Taylor, £50.
His wife to have use of household goods in his dwelling house; after her death, to be shared among grand children, as wife thinks fit. Residue to son Edward, who is his executor. At his executor's discretion, £3 per annum to son Thomas to keep lighter in repair, as long as he keeps lighter in his "own proper working".
Witnesses: Mary Easton, Susan Maynard and D. Fuller
Proved 13th June 1724

TO THE MEMORY OF
THOMAS BEST
(LATE OF LONDON)
WHO DIED JANUARY THE 8th 1823
AGED 51 YEARS
LEFT ISSUE 1 SON AND 1 DAUGHTER
VIZ. HENRY AND ELIZA
"Afflictions Sore, Long Time I Bore,
Physicians were in Vain,
Till God did Please [ to give me Ease]
[And Free me from my Pain]"