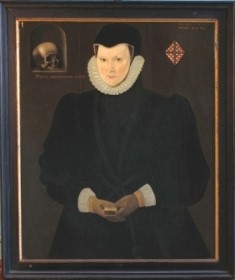 Elizabeth, daughter of Sir Thomas Roydon of East Peckham and heiress of Roydon, married William Twysden of Chelmington and Wye in 1541, after which they made their home at Elizabeth’s father’s house, which William and Elizabeth then inherited.  Elizabeth’s only surviving son Roger was born in 1542 and after his father’s death in 1549, Elizabeth re-married, staying on at Roydon Hall.  Her second husband, Cuthbert Vaughan, was at the time of their marriage in 1550, in the favour of his employer, King Edward V1 but his position changed when Mary acceded to the throne in 1553. ‘Commotions’ began across the country and in Kent grew quickly into Sir Thomas Wyatt’s rebellion.  Vaughan, as a party to this, was imprisoned when the rebellion failed. His wife’s ‘importable suit’ may have prevented his execution, but he remained in the Tower and renounced his fellow rebels before being released home in 1555.  Under Queen Elizabeth 1 he held military positions with success, but following wounds, he died in 1563.

Elizabeth and Cuthbert Vaughan had lost lands as a result of his involvement in Wyatt’s rebellion, but under Elizabeth, these were regained in part, and others added. The family position at Roydon Hall was well established, largely through the property acquisitions of Elizabeth and Thomas, her brother in law. In 1564 she married for the third time: Sir Thomas Golding of Halstead in Essex.  Lady Golding lived out her days between London, where she acquired property and Pluckley in Kent, where her daughter provided care in her last years. Elizabeth Roydon is described by her descendant, J.R. Twisden as ‘strong, business-like, ambitious’, but he continues ‘milder characters appear from her portrait.’ This portrait, painted in oil on panel with a skull and lozenge at the top, is unattributed. It is dated 1587 and indicates a smiling woman with still attractive features. The significance of the skull is unknown – it could indicate an awareness of the brevity of life and the certainty of death. It is thought to be a companion piece to the portrait of her son and heir, Roger Twysden. (Written by Janet Mayfield; Photo by Penny Greeves)

{The KAS collection includes a number of Twysden/Twisden family portraits that are currently housed at Bradbourne House. When, in November 1937 Sir John Ramskill Twisden died leaving no heir these portraits were bequeathed mainly to the Kent Archaeological Society, with others going to the National Portrait Gallery.  When Bradbourne House was purchased, by what later became the East Malling Trust, it was decided that the KAS portraits should be displayed in the house. The National Gallery then returned their portraits so that the collection could be kept together. Today the portraits hang in the Great Hall, main hallway and staircase at Bradbourne House.}